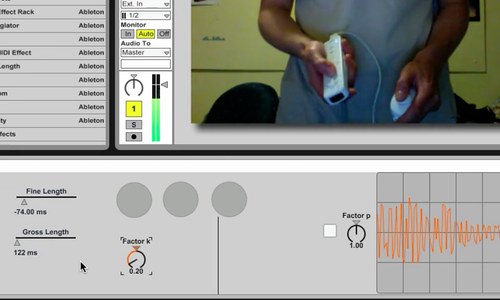 Intello1 is going pretty well, so well that I can now, again, release an update of how the project is going. For those who don’t know what I’m writing about. Intello is my Master thesis/project. The goal is to make a plugin, running in Ableton Live, programmed in Max for Live, which produces Glitches in a new fantastic way. Glitches are something I’m interested in now for years. The following video shows Intello’s current state.

I discovered a pretty big bug in Intello. Each first iteration of a loop was muted, which resulted in audio dropouts. A dropout’s length was determined by loop length’ settings. So when loop length was set to 1 second audio was muted for 1 second - a quite dramatic impact rhythm wise. The problem seemed to be that as soon as someone triggers a loop mode, Intello would switch to the recorded buffer, where plugin~, at the same time, writes samples into. poke~ doesn’t seem to be able to record and playback at the same time - understandably. Writing and reading at the same time would mean that at least 1 sample needs to be written before it can be read out. According to clock settings and buffer settings this would mean a more or less big latency. My workaround: I wait for the time one loop length takes and then switch to the playback buffer. Thankfully there are delay objects in Max, which are also able to stop outputting a message when an object sends a stop message. Imagine going into loop mode by pressing a button, then release that button before loop length time has passed. Intello would then still switch the output to the buffer, where, at that moment, nothing is written into, and audio would mute completely.

As I promised there will be an iPhone app, controlling Intello dynamically from a performers’ laptop. Piets has confirmed writing the iPhone app. If everything fails I have to do that by myself - it can’t be that hard as I’ve written already in Objective-C and it’s quite appealing. Someone said you should always have a Plan B, which is, in my case, using Wiimote’s instead of iPhone’s. A lot less attractive, because the interface is fixed and, as far as I can tell, Intello needs a Wiimote plus an attached Nunchuck controller. That means I need to spend more money on equipment, the audience is less controllable via the performer and last but not least: iPhones are damn cool.